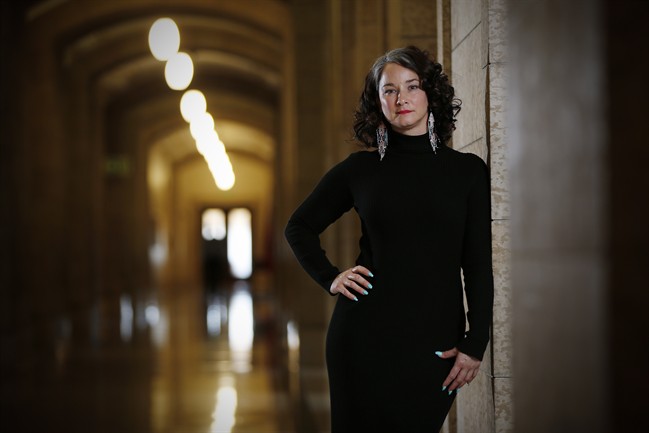 Nahanni Fontaine, an NDP MLA who shared her story of sexual abuse, is photographed at the Manitoba Legislature, in Winnipeg on Tuesday, November 15, 2016. (THE CANADIAN PRESS/John Woods)

OTTAWA – At eight years old, Nahanni Fontaine remembers waking up with her knees up and her panties down after family members built a place for her to sleep on the floor while guests were over.

“I couldn’t figure out what was going on,” she said. “I certainly know I didn’t go to bed like that.”

Fontaine —now an NDP member of the Manitoba legislature — says she was just five when she was sexually abused for the first time.

“I remember that as if it happened just yesterday.”

She recalls a drunken guest pushing her body onto a bed on the floor, pulling down her underwear and performing oral sex.

Years later, at the age of 12, she was molested again by the same person — only this time, she knew exactly what was happening.

Fontaine — a long-time advocate for missing and murdered indigenous women —knows her story is far from an isolated case.

The prevalence of abuse, both among victims and perpetrators, is expected to be key theme in the national public inquiry examining the issue, said Indigenous Affairs Minister Carolyn Bennett.

During a months-long investigation by The Canadian Press, a number of leading experts and authorities flagged shocking levels of sexual abuse in some indigenous communities. They also pointed to potential links to the aboriginal suicide crisis.

For Fontaine, who grew up in Winnipeg, abuse also affected members of her family from the Sagkeeng First Nation in southern Manitoba.

She said her mother, who died of a heroin overdose in Vancouver in the 1990s, was also a victim of abuse who was involved in sex work.

Starting at 12, Fontaine struggled with her own substance abuse.

She said she is public about her own story, especially in her role as a legislator, because she feels a responsibility to protect children.

“At the end of the day truth is not necessarily the easiest path, it is the only path.”

Fontaine said she agrees with the sentiments of Assembly of First Nations National Chief Perry Bellegarde, who has been urging chiefs to confront the problem of abuse and incest within their communities.

Leaders have a sacred responsibility to address the issue, she said, adding it is not their sole burden to carry but they have the ability to lift others up — including women, youth and elders.

“Indigenous people have always been courageous and we can be courageous in this as well,” she said.