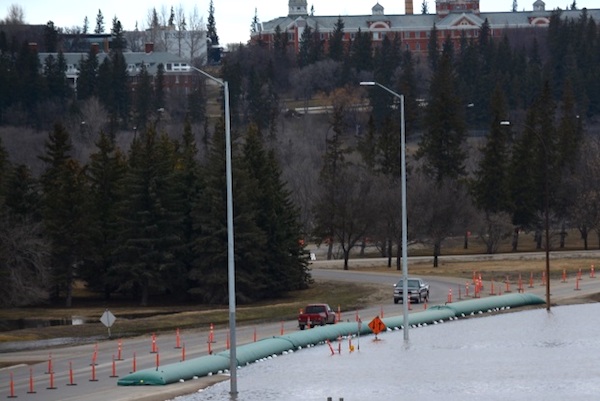 The aqua dam dike on 1st Street in Brandon to hold back the Assiniboine River, Sunday, April 9, 2017. (EBRANDON.CA)

BRANDON, Man. — Officials in Brandon are as ready as they can be as the rising Assiniboine River is expected to crest in the next 48 hours.

As of Sunday morning, the river was sitting at 1,178.68 feet above sea level at 1st Street. The Assiniboine could peak at approximately 1,180 feet either later today or Monday.

Crews have shored up a clay dike on 18th Street North and Grand Valley Road, while maintaining both lanes of traffic near the busy Corral Centre shopping area. Manitoba Infrastructure is placing aqua dams along 1st Street North.

“Crews continue to monitor outfalls and pumps along the river corridor to address any water seepage or pooling that may occur,” a statement from the city said.

One home on Rosser Avenue was sandbagged on Sunday as it sits outside the dike zone. The city says it doesn’t expect any residential or commercial areas to be evacuated as a result of the rising water.

The public is being asked to stay away from the Assiniboine River and off the entire dike system to allow heavy machinery and construction crews safe and unobstructed access to the river.

Public access has also been closed to Dinsdale Park and Queen Elizabeth Park. Officials at the Wheat City Golf Course and Recreation Centre have closed off public access to the course and the public are asked to respect all signage and barricades placed in the course’s parking lot until the peak has passed.

.@WheatCityGolf Here’s a look @WheatCityGolf Hole #1 this am. The built-up embankment is doing its job, but please stay away until peak passes! #BdnMb pic.twitter.com/sgPUdAGKMn