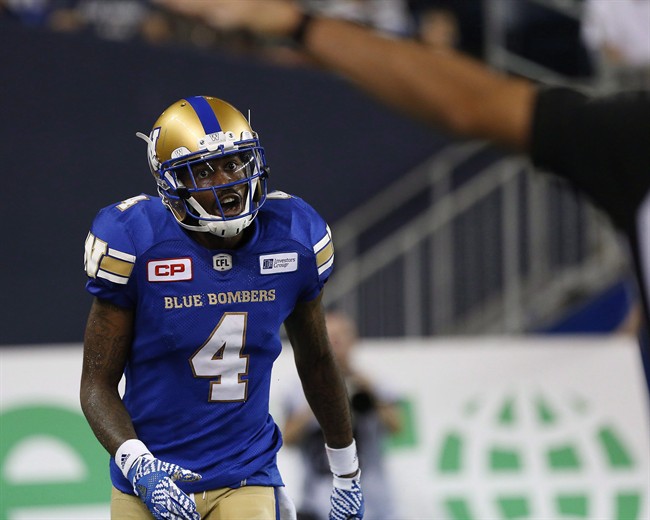 Winnipeg Blue Bombers’ Darvin Adams (4) calls for a pass interference call against the Calgary Stampeders during the second half of CFL action in Winnipeg Thursday, July 21, 2016. Adams would be happy to haul in some long bombs and take it to the house. Weston Dressler is gearing up to turn some short passes into big gains.But what the Winnipeg Blue Bombers receiving corps really needs to catch this season is a break on the injury front. (THE CANADIAN PRESS/John Woods)

WINNIPEG – Darvin Adams would be happy to haul in some long bombs and take it to the house. Weston Dressler is gearing up to turn some short passes into big gains.

But what the Winnipeg Blue Bombers receiving corps really needs to catch this season is a break on the injury front.

Seven receivers missed a total of 39 games last year because of injury. Adams topped the list at 10 games after he broke a collarbone in late July, while Dressler missed four contests.

“It’s football and injuries happen,” said Dressler, who’s embarking on his 10th CFL season. “You try and limit those as much as you can with the preparation you do with your body and all that, and hopefully we have little better luck with that.”

Dressler led the Bombers with 1,003 receiving yards off 80 receptions in the slotback’s first season with Winnipeg.

Adams returned for the final two regular-season games and the team’s West Division semifinal loss to B.C. In his eight outings, he caught 51 passes for 690 yards and six touchdowns.

The six-foot-two wide receiver signed a new contract in January that takes him through 2019. He was feeling good at training camp after more off-season rehabilitation.

“I’m blessed,” Adams said. “I just want to thank God that I’m better, and my trainers for getting me back prepared.”

Injuries forced Winnipeg to use 12 different receivers last season, which wasn’t all bad, according to coach Mike O’Shea.

He said quarterback Matt Nichols got to familiarize himself with more teammates, while players saw their chance could come at any time so they had to be prepared.

“So there’s lots of good things that can happen from that,” O’Shea said.

Only Canadian receivers Julian Feoli-Gudino and Rory Kohlert suited up for all 18 games last year.

Kohlert signed as a free agent with Calgary, but Feoli-Gudino is back with a unit that includes veteran returnee Clarence Denmark and newcomer Kenny Stafford.

Stafford joined the Bombers after a season in Montreal that ended when he and Duron Carter were surprisingly released last October.

“I’m going to fit in really well,” predicted Stafford, a six-foot-three pass catcher who played with Nichols in Edmonton in 2015.

“We’ve got a great dynamic of receivers. There’s Dressler, Adams and Denmark, who’s coming back after a great year. You’ve got (Gerrard) Sheppard, who’s also a returning starter.

Sheppard was one of the walking wounded last season, missing six games. Addison Richards, the team’s 11th overall pick in the 2015 CFL draft, also sat out a half dozen games in his second straight injury-riddled season.

Some of last year’s receivers aren’t back, including Ryan Smith, who missed a total seven games in two different stretches. He retired in March. Receiver/kick returner Quincy McDuffie was sidelined for five games, got an early release in the off-season and signed with the NFL Dallas Cowboys.

“We’d like consistency so we can get all on the same page,” LaPolice said. “Sometimes it is a challenge with injuries, but we’ve got to adapt to that.”