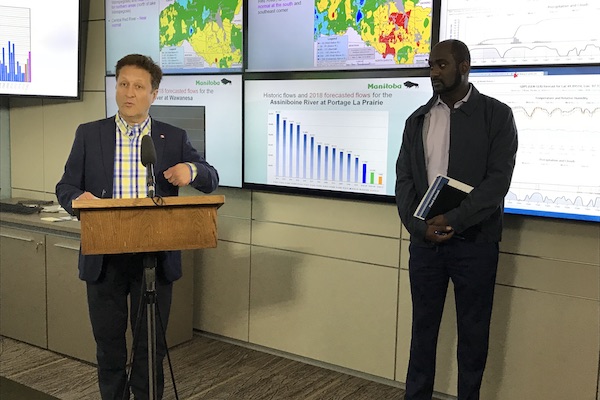 WINNIPEG — Despite a late winter snowstorm on March 5, Manitoba’s flood risk remains low to moderate for much of the province.

The second — and likely last — flood outlook of the season was released Friday, setting the stage for a relatively worry-free spring flood season.

“After the storm earlier this month, the risk of major flooding remains low on the Red and Assiniboine Rivers, but there is a moderate risk of some overland or overbank flooding,” said Infrastructure Minister Ron Schuler.

“Levels along the Red River and the Assiniboine River are forecasted to remain below flood protection levels.”

Schuler says the province continues to monitor for ice jam-related flooding on Manitoba’s rivers and streams.

The flood risk is also low on the Souris, Qu’Appelle and Pembina Rivers, along with most major lakes in the Interlake region, including Lakes Winnipeg, Manitoba and Dauphin and the Whiteshell lakes.

Highway 75 south of Winnipeg is expected to remain open with the use of the Red River Floodway under normal and unfavourable weather conditions, the province said.