Winnipeg and Shaw Power Up Free Wi-Fi in Civic Facilities 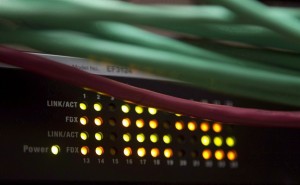 Lights on an internet switch are lit up as with users in an office in Ottawa, on February 10, 2011. (THE CANADIAN PRESS/Adrian Wyld)

Free wireless internet access is now available at more than 130 city facilities through a partnership with the City of Winnipeg and Shaw Communications.

“Access to Wi-Fi is an important resource for residents no matter where they are in our city. With the support of Shaw, we can now offer free Wi-Fi at nearly all of our community centres, indoor pools, arenas, and libraries,” said Mayor Brian Bowman.

Users can access the network by selecting “ShawGuest” from the device’s Wi-Fi settings menu, opening their internet browser and accepting the terms of use.

A previous agreement between the city and Shaw was announced in 2013, allowing complimentary Wi-Fi in civic facilities for Shaw customers only. Monday’s announcement will see the same infrastructure being utilized, but open access to all residents and visitors.