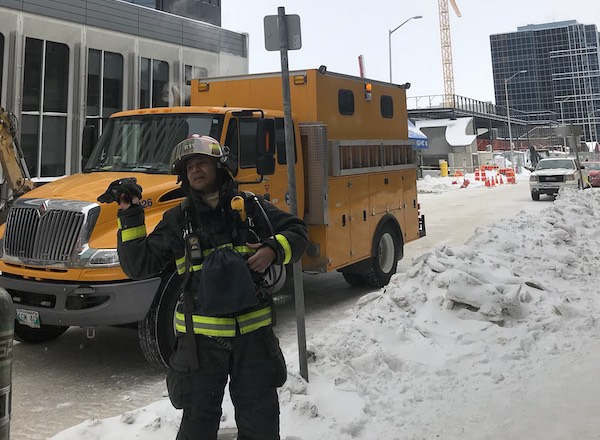 Emergency crews work at the scene of a gas leak in downtown Winnipeg on Thursday, February 7, 2019. (@MANITOBAHYDRO / TWITTER)

The gas rupture happened at around 11:30 a.m., resulting in a high volume gas leak in the downtown area.

“At this time, gas is venting safely into the atmosphere. WFPS crews continue to monitor levels in all nearby locations,” the city said in a release. “Manitoba Hydro is working to close gas valves to the area in order to complete the necessary repairs.”

Winnipeg Transit buses have been located on Pioneer Avenue at Main Street for any evacuees requiring shelter.

UPDATE: 1:45 p.m. — The gas has been shut off and crews will begin repairing the rupture.

You can hear the gas leak blowing safely in the air. Again, please avoid the area if possible near Portage and Fort. pic.twitter.com/2TWo7SzAW9

See that little piece of yellow on the bottom right? That’s where a contractor hit the gas line. Fort St. remains closed as our crews make repairs. pic.twitter.com/2pSY5WohYR