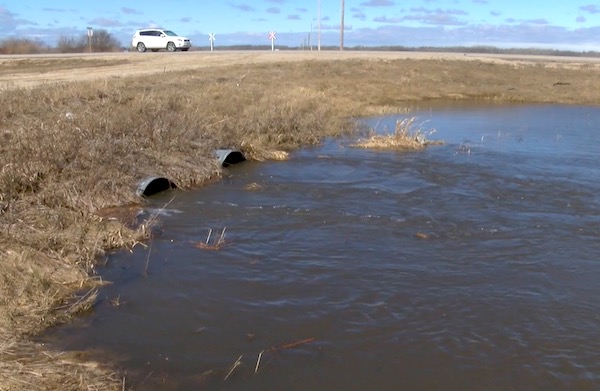 WINNIPEG — Manitoba is in for a soggy spring as the province predicts major flooding this year along several waterways, including the always weary Red River.

“Early forecasting data shows that we expect to see major flooding along the Red River, with both the Red River Floodway and the Portage Diversion pressed into service,” said Infrastructure Minister Ron Schuler.

Schuler says, in an ideal situation, the weather would trend towards a few degrees above zero with no additional precipitation heading into the season.

With normal weather conditions, the Red River south of the floodway could see water levels expected to be near 2011 levels. With additional snowfall late in the season or other unfavourable conditions, such as spring rains and a rapid snowmelt, the Red could see levels comparable to 2009. During that year, Highway 75 was partially closed, along with other roads and evacuations in some areas.

The province says overland flooding is a possibility and some community dikes may need to be partially closed to maintain local access.

Both the Red River Floodway and Portage Diversion are expected to be operational once river ice has mitigated.

“March remains a crucial month in terms of snowmelt and weather conditions, and how that will affect the flood forecast going forward,” Schuler added. “We expect to update Manitobans with more information as updated forecast data becomes available.”

Turning attention to the Assiniboine and Souris rivers — those waterways are also expected to be high. On the bright side, forecasters say peak water levels will be below flood protection levels.

“Flows may produce some flooding of farmland and low-lying areas. The Shellmouth Dam will be operated to store a portion of the spring run-off, thereby reducing downstream river flows,” the province noted in its outlook.

Officials with the National Weather Service in the U.S. released their flood outlook on February 21, predicting a high risk of major flooding on the Red River at Oslo and Pembina, North Dakota.