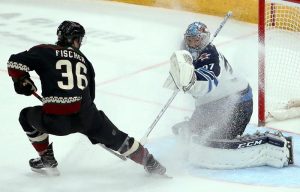 The NHL announced the schedule for the first round Sunday morning.

Winnipeg will host the St. Louis Blues for Game 1 Wednesday and Game 2 Friday. The Jets then travel to St. Louis for Games 3 and 4 of the best-of-seven series on Sunday and Tues. April 16.

The Jets finished in second place in the Central Division behind the Nashville Predators despite leading in the division race for much of the season.

Calgary, the top team in the Western Conference, hosts the Avalanche Thursday and Saturday before travelling to Colorado the following week for Games 3 and 4.

The Maple Leafs play the familiar foe Bruins in Boston Thursday and Saturday before the series shifts to Toronto on Mon. April 15 and Wed. April 17 for Games 3 and 4.

The Leafs, who finished third in the Atlantic, have lost playoff series against Boston in two of their last three post-season appearances, including a seven-game exit in the first round of the 2018 playoffs.