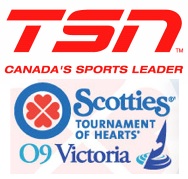 It’s obvious most Canadians were not watching the season premiere of Celebrity Apprentice 2 on Sunday night, because curling ruled the airwaves. While Donald Trump’s faux reality show increased viewership in the key Toronto market by 32% during the course of the evening, there was no beating TSN.