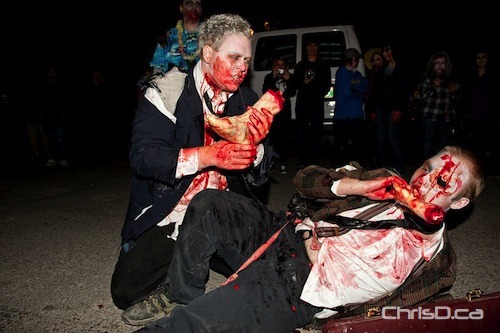 Zombies take a bite out of each other's body parts during the Winnipeg Zombie Walk on Saturday, October 23, 2010. (TED GRANT / CHRISD.CA)

Thousands of zombies made their way through downtown streets Saturday in the annual Winnipeg Zombie Walk.

A parade of limping zombies and other barely alive-looking creatures halted traffic temporarily, but motorists didn’t seem to mind, smiling and honking their horns to join in with the unusual spectacle.

The event began at 7:30 p.m. in the Royal Albert parking lot, before making its way through the Exchange District. Pools of fake flood could be seen on the sidewalk along the route.

Winnipeg Harvest benefited from the walk, with zombies donating a non-perishable food item for a photo by Henry’s photography store. Those who didn’t bring a donation received a photo for $2.

Zombies take a bite out of each other’s body parts during the Winnipeg Zombie Walk on Saturday, October 23, 2010. (TED GRANT / CHRISD.CA)
← Previous: Escape Artist Gunnarson to Be Buried Alive on Friday Next: Police Bust Marijuana Grow-Op in Dauphin →
Tags: Halloween