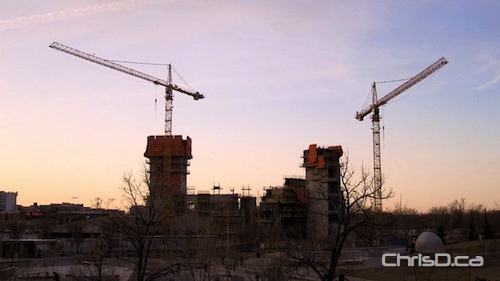 The Canadian Museum for Human Rights at The Forks as seen in 2009. (CHRISD.CA)

Staff at the Canadian Museum for Human Rights will have their own rights protected after joining a union.

After a three-month campaign, CMHS employees are joining the Public Service Alliance of Canada (PSAC).

PSAC volunteers with the prairie region worked to secure the deal, which will provide representation to all non-managerial museum staff. The Canadian Industrial Relations Board granted PSAC certification on December 7.

“We work for a human rights museum,” said museum researcher Armando Perla. “In the museum’s exhibits, we are featuring the workers’ movements that have taken place throughout history and we needed the union to make it a reality within the museum today. The union will make the museum a better museum.”

The museum continues to fundraise for its $150 million goal, but is still $25 million short.

Construction is expected to be completed at The Forks by 2013.

← Previous: 'One Big Day' Raising Donations for Christmas Cheer Board Next: Want to Be a Mobile Journalist at Sun TV? →
Tags: Canadian Museum for Human Rights | The Forks