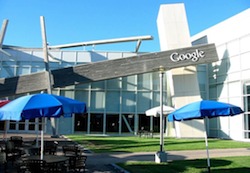 An exterior view of the Google Campus in Mountain View, California. (MARTIN STEHR)

A man from Rosa, Manitoba is suing Internet giant Google over privacy concerns.

Tyler Wereha alleges Google breached his privacy when they automatically set up a social profile on his behalf as part of its Google Buzz service.

Wereha says a popup box appeared when he signed into his Gmail account, asking whether he wanted to enable Buzz or not. When he declined, Google created a profile anyway, exposing much of his personal information and e-mail contacts for the public to see.

A spokesperson for Google Canada told ChrisD.ca they don’t comment on pending litigation, but said they take the privacy of its users very seriously.

The allegations have not yet been proven in court and no dollar figure has been listed in the lawsuit.

Google is valued at around $200 billion USD, according to technology analysts.