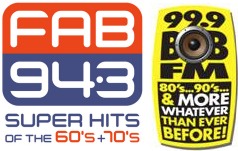 If you tuned in to hear the new morning show on FAB 94.3 Tuesday morning, you didn’t hear much.

CHUM Radio launched FAB 94.3 on December 26 as a ’60s and ’70s station with Beau, Tom and Frazier in the morning, but neither of the three were on the air.

The postponement of the program had many listeners scratching their heads, as the station has been promoting the trio heavily for over a week.

A pre-recorded message on FAB stated that Beau was off sick.

CHUM Radio Promotions Coordinator Amy Houston confirmed the news via e-mail late Tuesday, stating Beau is out with the flu. He hopes to return by Thursday, at which time the new show will debut with all three personalities.

Andrea and Jay — formerly of the defunct CURVE 94.3 — are the new morning hosts at sister station 99.9 BOB FM, but were also not on the air Tuesday. Houston says Andrea Collins is also out sick, but Jay will fly solo with the launch of the new BOB morning show. It debuted earlier this morning.

UPDATE: 3:30 p.m. — We shot the below video of Tom and Frazier talking about the FAB 94.3 morning show setback earlier this morning.