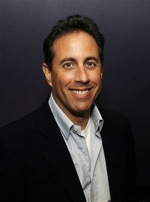 Comedian Jerry Seinfeld will be bringing his standup comedy routine to Winnipeg this fall.

This isn’t the first time Seinfeld has played Winnipeg. The New Yorker performed at Rumor’s Comedy Club in the ’90s.

The presale begins Wednesday at 10 a.m. and will end Friday at 10 p.m. Use COMEDY as the password at Ticketmaster.