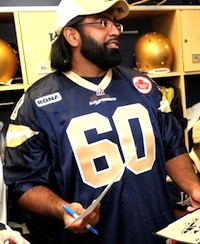 Winnipeg Blue Bombers offensive lineman Obby Khan has been named the recipient of the Cal Murphy “Heart of a Legend” Award for the third time.

Khan is also the nominee for the CFL’s Tom Pate Memorial Award, which the league gives out annually.

The Ottawa native plays an active role in the community, co-founding Project Echo, a fundraising group to bolster fundraisers and volunteerism by creating a network of citizens willing to make a difference to improve the lives of Winnipeggers. Khan is also very involved with the Crohns and Colitis Foundation and sits on the planning committee of the SMD Foundation, as well as volunteers with Variety, the Children’s Charity of Manitoba and the Children’s Hospital Foundation.