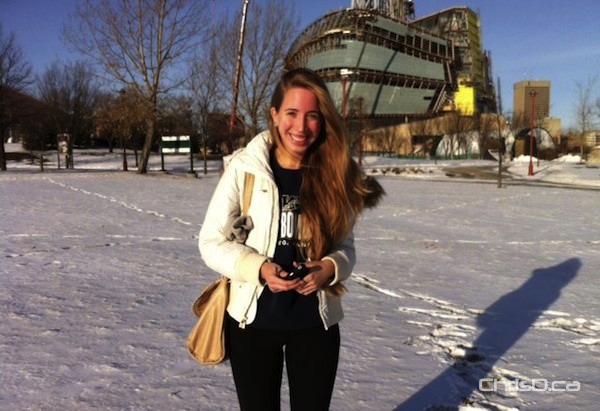 After scouring locations across Winnipeg on Tuesday and Wednesday looking for a “Mystery Man,” Larissa Gosek is going to the 99th Grey Cup in Vancouver this weekend.

Tourism Vancouver and ChrisD.ca launched the Grey Cup Chase contest on Tuesday, giving football fans across the city certain clues on Twitter as to where to find the mysterious Mystery Man. The task was to be the first person to find him and say the secret phrase, “Are you going to Vancouver?”

The hunt began at the University of Winnipeg, where even city police officers and cadets were getting in on the fun by asking strangers the phrase. After no luck, the search turned to a public library downtown and Polo Park Shopping Centre. When the first day of clues didn’t lead participants to the man, the contest carried over to Wednesday. During the first morning stop at The Forks, Larissa Gosek was the lucky one in identifying the Mystery Man.

The 19-year-old wins herself two tickets to Sunday’s game (she’ll be taking her father), return airfare to Vancouver, two night’s accommodation and other prizes.

Thank you to everyone who followed @ChrisDca on Twitter for daily clues and subtle hints during the two-day search.

The creative campaign was orchestrated by Vancouver-based firm Think! Social Media on behalf of Tourism Vancouver.

Sunday’s game between the Winnipeg Blue Bombers and the BC Lions will air Sunday at 5:30 p.m. CT on TSN.