Habitat for Humanity Has Record Year for Home Builds 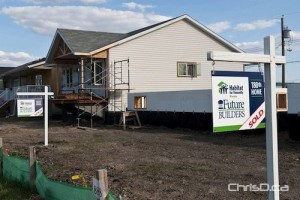 Habitat for Humanity is building on its success, coming off of constructing 21 local homes in 2011 and breaking an 18-year record. If you count the two homes Habitat built outside of Winnipeg in Virden, Manitoba, that number climbs to 23.

“Fifteen Winnipeg families have moved into their new Habitat homes in time to fully enjoy the holiday season while the remaining families will occupy their homes early in 2012,” said Sandy Hopkins,” Habitat Winnipeg CEO.

The largest number of homes this year were built in the Elmwood area, with eight homes residing at the Sir Sam Steele School site on Nairn Avenue. Other areas included St. Boniface, Transcona and West Kildonan.

Habitat Winnipeg is celebrating its 25th anniversary in 2012 and hopes to build 25 homes in that time.