Home » Sports » Teemu Returns to Where It Started

Teemu Returns to Where It Started 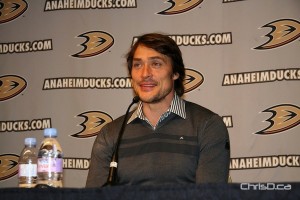 WINNIPEG — It took over 15 years, but one of Winnipeg’s most cherished sports icons — Teemu Selanne — made his long awaited return Saturday, addressing a media throng in the hours leading up to his game against the Winnipeg Jets.

“I am so lucky that I played here,” said Selanne, smiling often during 20 minutes of answering reporters questions.

“I still feel that the fans here have supported me through my career, and I’m very thankful for that.”

When asked if he was surprised to see a gathering of loyal fans waiting for him in the middle of the night when he and his teammates arrived at their Winnipeg hotel, Selanne put it into perspective.

“That was unbelievable. I wasn’t expecting anybody to be here at 3 o’clock in the morning. It just shows how much the fans mean to me, and how important the fans are to hockey.”

According to management at Winnipeg’s Fairmont Hotel, roughly 30-40 of Selanne’s loyal admirers began congregating outside for over two hours before he arrived. He signed autographs for every one.

“Those guys are diehard hockey fans, and it was amazing to see them.”

Selanne’s family even made the trek from Anaheim to see his reception in Winnipeg.

“They arrived yesterday, and right away they went to play hockey on the outdoor rinks for about three hours,” said Selanne of his sons. “My oldest son was born here, so for him (to see me play here) is even more special.”

Selanne was the key cog in a blockbuster trade nearing the end of the first incarnation of the Jets in Winnipeg. On February 7, 1996, Teemu was traded to the Mighty Ducks of Anaheim along with Marc Chouinard and a fourth-round draft pick in exchange for Chad Kilger, Oleg Tverdovsky and a third-round pick.

“It was obviously a tough time when I got traded. I really liked this place, even though we knew we were going to leave (to Phoenix). You almost feel that you have failed in your job. So quickly, I was gone. I didn’t have a chance to say goodbye to my friends, and obviously the city.”

Through 20 NHL seasons, Selanne has amassed 647 goals and 724 assists for 1,371 points in 1,290 career games with Winnipeg, Anaheim, San Jose, and Colorado. This year, at the age of 41, he leads his team with 31 points in 31 games despite considering retirement during the offseason.

Selanne and the Anaheim Ducks faceoff against the Jets on Saturday at 6 p.m. at MTS Centre. The game will be broadcast on Hockey Night in Canada on CBC.