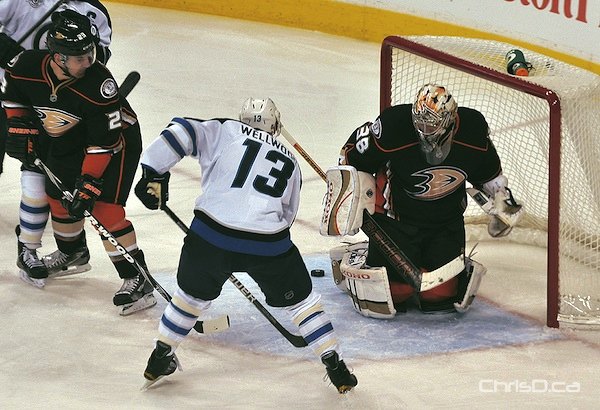 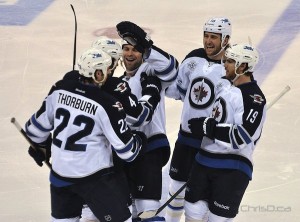 The Winnipeg Jets celebrate a goal scored by defenceman Zach Bogosian (4) against the Anaheim Ducks during the third period at MTS Centre on Saturday, December 17, 2011. (MAURICE BRUNEAU / CHRISD.CA)

WINNIPEG — After spending parts of four seasons with the Winnipeg Jets in the 1990s, Manitoba hockey hero Teemu Selanne finally had a chance to lace ‘em up and play in front of his long-time fans in Winnipeg.

“I didn’t really know what to expect,” said Selanne following the Anaheim Ducks’ 5-3 loss on Saturday. “It was 15 years ago when I played here last. It was unbelievable.”

That may prove to be an understatement, as the Ducks’ reception from the Jets faithful was quite uncanny.

As Selanne took to the ice after the game’s first whistle, the sold-out MTS Centre crowd erupted with a standing ovation. Every time the future Hall-of-Famer touched the puck, the crowd cheered. But anytime another Anaheim player did, the crowd booed. It was a remarkably unique experience — for both fans, and players.

“It’s different, that’s for sure,” said Anaheim forward Corey Perry of the cheer-jeer yo-yo effect. “But it was fun, and it was a great night. He’s a class-act guy, and I think they did it right tonight.” 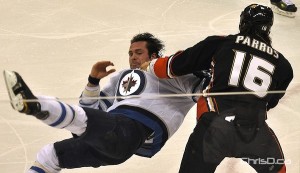 “It was an exciting game,” said Ducks forward Ryan Getzlaf. “The end result obviously wasn’t what we wanted to give Teemu tonight, but we were pretty impressed with the way the crowd responded to him, and rightfully so.”

“He’s one of the best humans that we know,” added Getzlaf when asked about Selanne’s three standing ovations in the game. “It’s not just about the on-ice stuff. It’s about the way he is in the community, and the way he is with his fans and friends.”

Selanne displayed deep emotion in his post-game availability, reiterating how much the fans and the city where his career started mean to him. When asked, he chose his parting words carefully.

“Just, thank you. Obviously, the support — 20 years. It has been so special. Tonight made my whole career, pretty much. It was something that I’m always going to remember. There’s always a big piece of Winnipeg people in my heart.”

The Winnipeg Jets celebrate a goal scored by defenceman Zach Bogosian (4) against the Anaheim Ducks during the third period at MTS Centre on Saturday, December 17, 2011. (MAURICE BRUNEAU / CHRISD.CA)

The Jets jumped out to an early 2-0 lead on goals from Kyle Wellwood and Blake Wheeler. Anaheim responded late in the first to make it 2-2 after 20.

Alexander Burmistrov ripped a wrister top corner 31-seconds into the second for his seventh of the year, before Andrew Ladd found the game-winner come off his skate via Dustin Byfuglien late in the frame.

Winnipeg goaltender Chris Mason stopped 33 on the way to his third-consecutive victory.

The Jets (15-13-4) continue their marathon December home stand with three games this coming week against the New York Islanders, Montreal Canadiens, and Pittsburgh Penguins on December 23.