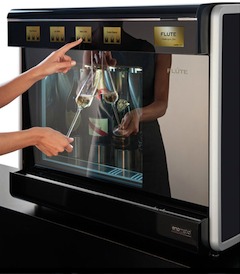 The system pours a glass of wine for patrons without making them obligated to purchase an entire bottle.

The Flute wine system was created by Enomatic, allowing sparkling wine to be served directly from the bottle straight into the glass, and preserving its organoleptic properties for over three weeks.

Three other Flute systems are currently in place in Toronto, Vancouver and Quebec City, but Winnipeg is the first location to offer a self-serve version.