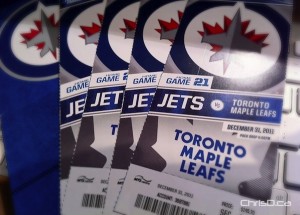 Winnipeg police said the man turned himself into police on Wednesday after being identified as a suspect in an investigation.

The tickets were being sold to unsuspecting buyers throughout the city, police said.

The man faces four counts of fraud under $5,000 and possession of goods obtained by crime. He was released on a promise to appear.

Police are recommending anyone looking to purchase Jets tickets only do so from people known to them or through a legitimate ticket exchange venue.