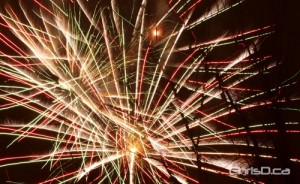 Fireworks at The Forks (CHRISD.CA FILE)

New Year’s Eve will be celebrated at The Forks on Saturday night — the perfect place to be following the Jets/Leafs game at MTS Centre.

“We’re kicking off the new year as we always do, with a party and fireworks,” said Paul Jordan, The Forks’ chief operating officer. “Two-time world champions Archangel is putting on a spectacular show following a party in the port.”

Activities for the whole family include horse drawn wagon rides, kids crafting and a gigantic party in the port leading to fireworks.

Party in The Port
9:30 p.m. — Get outside and gear up for the Fireworks with a dance party in the Port with DJ Hunnicutt & DJ Coop
10 p.m. — Fireworks Show by two-time world champions, Archangel Fireworks.

All regular Winnipeg Transit and Handi-Transit service will be free-of-charge between 9 p.m. until the end of service.