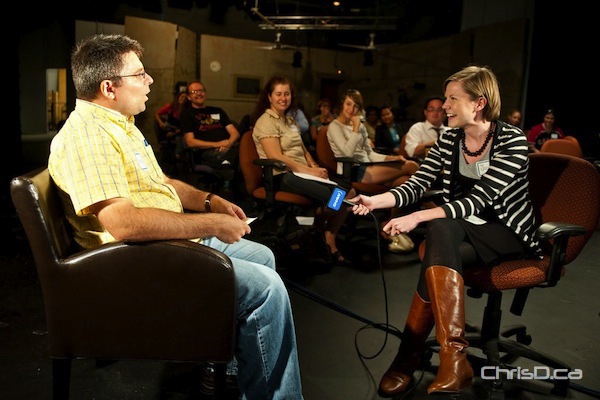 Shaw TV Winnipeg will once again hold a workshop to show the public what’s involved with producing their own show on the network.

The volunteer/community producer workshop will be held Tuesday, February 7 at Shaw’s studios located at 22 Scurfield Boulevard. Prior to that, an open house on Thursday, February 2 will provide an opportunity to get a sense of what it’s like behind the scenes at Shaw TV.

Attendees will get to tour the broadcast facilities, such as the studio, mobile truck and master control, and try their hand at operating a studio camera, ENG camera, and being a reporter.

The station previously held a workshop in April 2010 (view photos), and garnered an overwhelming turnout from members of the community curious on the ins and outs of the television business.

“The workshop is for anyone interested in producing a show for air on Shaw TV, or volunteering to work on a program,” Shaw TV host and producer Kim Babij said. “We’ll go through the rules and guidelines — both ours and those of the CRTC — and explain the expectations and criteria if someone was to get a show or come on as a volunteer.”

To register for the workshop, send an e-mail to [email protected]. Registration isn’t necessary for the open house, which will run from 12 p.m. to 9 p.m.