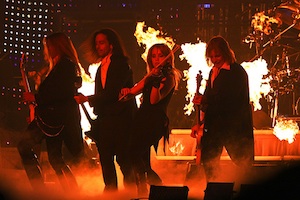 A number of Winnipeg concert announcements were made Monday morning, starting with Trans-Siberian Orchestra. The American progressive metal band will bring their brand of “Rock Theatre” to MTS Centre Friday, April 13. Tickets for Beethoven’s Last Night Tour go on sale this Friday at 10 a.m. through Ticketmaster. Prices are $25, $35, $59.50 and $69.50.

American rockers Van Halen have moved their Winnipeg date up for their 2012 North American tour. The band — led by frontman David Lee Roth — will play MTS Centre on Sunday, May 13 with special guests Kool and the Gang. The concert was originally announced earlier this month as being May 17. Tickets go on sale through Ticketmaster this Saturday at 10 a.m. for $29.50, $59.50, $89.50 and $149.50.

Canadian singer-songwriter Kathleen Edwards will perform at the Garrick Centre on Saturday, April 14. Tickets are $27.50 and go on sale through Ticketmaster this Friday at 10 a.m.