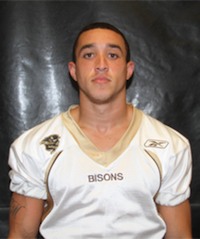 University of Manitoba Bison football receiver Quincy Hurst was signed to the Toronto Argonauts on Monday.

Hurst was one of the Argonauts’ 2012 CFL Canadian Draft picks (4th round, 28th overall). The Argos also signed LB Aaron Crawford (6th round, 40th overall), as well as import DL Derrick Summers through the 2014 season.

Hurst, 23, did not play with Manitoba last season but dressed and played in all eight conference regular season games in 2010 for the Brown and Gold.

All three players will be on the field with other Argos rookies this Wednesday, May 30 afternoon when rookie camp opens in Mississauga.