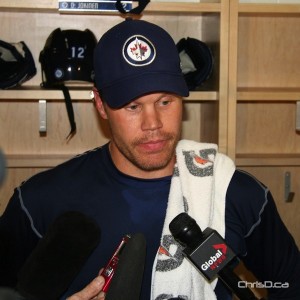 WINNIPEG — The Winnipeg Jets’ biggest off-season free agent acquisition has arrived in the city, and took to the ice Thursday afternoon — on his own dime — to workout in preparation of the upcoming NHL season.

Olli Jokinen, the 33-year-old centreman who signed a two-year, $9 million pact in early July, moved to Winnipeg with his wife and children in mid-August and says he really likes what he’s seen here so far.

“It’s nice. Really nice. People are very nice here,” said the veteran following his 60-minute workout at MTS Iceplex. “It’s overwhelming how nice the people are here. The city, it’s great. It’s small — a little bit smaller than Calgary, but like I said, it’s great and easy to get around.”

Jokinen, who stands 6-foot-2 and weighs 210-pounds, joins a team that desperately needed size and skill up the middle. The former captain of the Florida Panthers and Calgary Flames instantly becomes the oldest player on the roster and will be looked upon to add leadership and veteran savvy to one of the league’s youngest teams.

At a point in his career where he has played a total of six career NHL playoff games through 15 seasons as a professional, Jokinen hopes to take that next step with an emerging team.

“You look at the lineup, and a lot of players are high draft picks,” said the 1997 third-overall selection. “Last year they got closer. Every year they’re getting closer and closer and better. For me to come in, it’s no different than any other year. You try to fit in and try to do your best. Whatever your role is, you try to do the best you can to help the team.”

If you take Jokinen’s numbers from the 2011-12 season in Calgary (23G, 38A, in 82 games), he would have finished second in scoring among Jets, just three points behind Blake Wheeler’s 64.