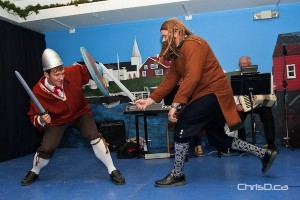 The 50th anniversary of Winnipeg’s Scandinavian Cultural Centre will be marked with a three-day celebration next week.

The fun begins Friday, September 7 with a gala reception to honour the centre’s hard working volunteers. Legendary local “Jazz Viking” Walle Larsson and his band will perform, as will the centre’s own Scandinavian choir featuring a medley of national anthems.

Traditional finger foods and imported beverages will be served to keep appetites in check. Tickets are $10 for the gala by calling (204) 774-8047.

Saturday and Sunday include a mix of day-long activities both indoors and outdoors, including a game of “kubb,” which is described as a cross between shuffle board and chess.

Most events for the weekend are free — with the exception of the gala — and will take place at the centre, 764 Erin Street.