Home » Sports » Have Used Hockey Equipment? The City Wants It

Have Used Hockey Equipment? The City Wants It 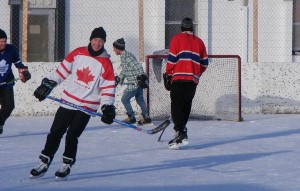 A two-week hockey equipment drive kicked off Friday at City Hall, encouraging Winnipeggers to drop off their used equipment at any of 16 locations throughout the city.

“I know that playing hockey gave me direction as a young person,” said councillor Thomas Steen, a former player on the Winnipeg Jets. “No young person should be denied the opportunity to participate in sport and be engaged in their community because they can’t afford to play.”