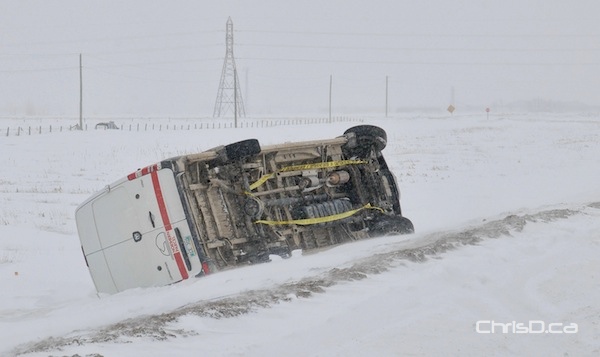 A delivery truck lays on its side after rolling off Brookside Boulevard on Monday, March 18, 2013. (STAN MILOSEVIC / CHRISD.CA)

The cost to clean up this latest blast of winter will cost the City of Winnipeg $1 million.

Crews began clearing streets, sidewalks and back lanes Monday after the city received about 15 centimetres of snow.

All main routes, bus routes and collector streets will be plowed first, as sanding and salting trucks follow to improve traction.

Plowing of back lanes will begin Tuesday morning from 7 a.m. to 6 p.m. and will continue daily until completed.

About 250 pieces of equipment will be used for this clean-up operation.

No winter parking bans are currently in effect.