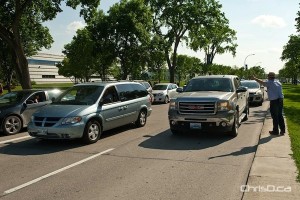 The Winnipeg Blue Bombers say their traffic plan for last Saturday’s Taylor Swift concert worked well, but they are still making improvements on the flow of vehicles to and from Investors Group Field.

“As 33,000 fans streamed in, it went just as well as it could have,” Blue Bombers vice-president and COO Jim Bell said on Monday.

Concert-goers complained of waiting up to one hour and 40 minutes to exit some campus parking lots following the show. The ride into the stadium? Trouble-free for the most part, fans said.

Winnipeg Transit increased the number of buses used to take fans to the U of M, and also had dedicated bus-only lanes in service. Having the concert on a Saturday also let fans arrive to the stadium earlier than usual, with the majority showing up between 3:30 p.m. and 5:30 p.m.

Transit had 170 buses in operation that night entering the stadium and 183 departing from the event, with a peak loaf of 9,833 passengers by the end of the night. 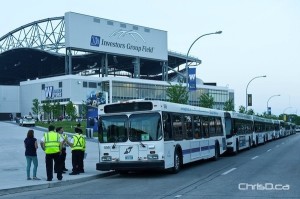 Thursday night is another test

The Blue Bombers are expecting a full house on Thursday when the team hosts the Montreal Alouettes in their season home opener. Bell said the club expects to announce a sell-out within the next 24 hours.

“While it is always a challenge at any venue moving 30,000+ fans at once, we will be looking at all hot spots to determine what we can do to east traffic as it leaves events,” he said.

One of those hot spots will be the U of M parkade just east of the stadium. More details to the enhancements being made for fans will be available at InvestorsGroupField.ca by Tuesday afternoon.

Winnipeg Transit will have 196 buses in operation — 116 school buses and 80 regular buses — which is expected to help transport an estimated 11,500 fans.