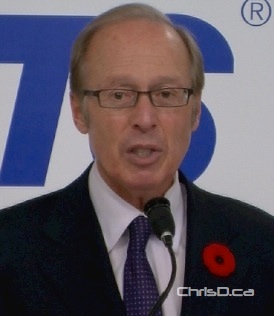 Mayor Sam Katz is off to Toronto, where on Friday he will participate in the 21st annual National Conference on Public-Private Partnerships (P3s).

Katz will join other municipal leaders in a session to explore the role that P3s play in meeting critical infrastructure challenges.

“The Chief Peguis Trail Extension and the recently completed Disraeli Bridges Project were both completed on time and on budget, and have given us a proven model for future P3 projects in the city,” Katz said.

Winnipeg’s mayor will be joined on the panel by Barrie Mayor Jeff Lehman, Regina Mayor Michael Fougere, and the former Mayor of Edmonton, Stephen Mandel.

“Winnipeg, like many Canadian municipalities, is challenged by aging infrastructure that places heavy demands on the City’s budget,” Katz added. “P3s are not the right fit for every project, but for major infrastructure renewal, like in the case of our bridges, they can be a highly effective means to help stretch taxpayer dollars and ensure delivery of a top-quality product.”