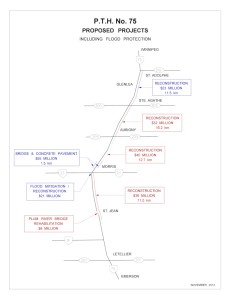 Proposed upgrades to Highway 75 to mitigate flooding and ensure the smooth flow of trade from the U.S. (Click to enlarge)

To ensure a vital transport link between the U.S. and Canada remains open during spring flooding, Highway 75 will see $215 million in structural upgrades.

The Manitoba government will focus on the northbound lanes to be built to interstate standards, similar to what the southbound lanes have seen within the last five years.

The announcement was made Wednesday at Bison Transport on Sherwin Road alongside officials from the Manitoba Trucking Association, Manitoba Heavy Construction Association and CentrePort Canada.

Work includes rebuilding 53 kilometres of the northbound lanes of Highway 75 from St. Jean Baptiste to St. Adolphe, and constructing new bridges over the Morris River (north of Morris) and the Plum River (south of Morris) that will complement existing flood protection infrastructure for the area.

Upgrades in five other key locations are also part of the government’s proposal (left), building on the work already completed.

“When PTH 75 is closed, Morris is cut off. That’s why it’s so important that we get down to work strengthening this important asset for Morris and for all of Manitoba,” said Morris Mayor Gavin van der Linde. “New bridges and a rebuilt highway mean income for our local businesses is more secure and our families are safer in times of flood.”

As part of the provincial government’s throne speech on Tuesday, Premier Greg Selinger announced $5.5 billion in infrastructure spending, including the Highway 75 project.

Work will be done in stages to maintain traffic-flow in each direction on the highway at all times while construction is underway. Rebuilding of the northbound lanes from Aubigny to Ste. Agathe will be tendered this winter with construction beginning in the spring of 2014.

Selinger said construction will be the equivalent of one year of employment for 2,500 people. The project is expected to take four to five years to complete.