‘Tom and Larry’ Relaunch Radio Show as a Podcast 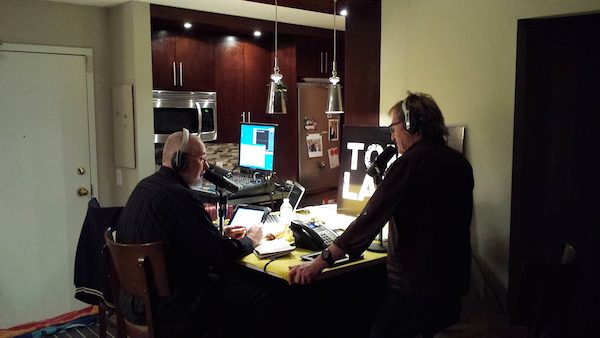 Larry Updike and Tom McGouran on air for their first show on Monday, March 10, 2014. (FACEBOOK)

The boys are back! Although these ‘boys’ are veteran radio broadcasters who have made the leap into a digital medium.

Tom McGouran and Larry Updike — known to Winnipeggers as Tom and Larry — relaunched their popular radio show on Monday morning.

The duo ruled the local airwaves 20 years ago when they held down the morning show on 92 CITI FM. Other opportunities came around and the “Tom and Larry” that listeners became to know on terrestrial radio were only a memory — until now.

The one-hour live podcast on TomAndLarry.ca allows the two hosts to reconnect with their audience and also attract some new fans. Not having the restraint of commercial radio means there isn’t a limit on how far the show may reach.

McGouran last worked at CITI and Updike at CBC until they were both canned within the past year. They’re quick to point out it was the first time they were fired separately.

“We saw our chance and the way the digital world is going and thought it was the perfect time,” McGouran told ChrisD.ca. “It was really like riding a bike! The chemistry was still there.”

With time on their hands and no shortage of things to talk about, the two sit in McGouran’s condo every weekday morning to record their show. While it’s only from 7-8 a.m., it works out to be about the same amount of content as a regular five-hour morning show would be, minus the commercials and music.

“It’s a really nice place to be in,” McGouran added. “All content, no stopping in the middle of bits to play a song or a bunch of commercials.”

The kitchen studio is an adjustment, and one McGouran’s wife may have to get used to over time. She didn’t stick around for the debut broadcast, instead opting to deck out and head to the gym so the two could do their thing.

With only one show down, there’s already talk of possibly extending the 60 minutes to something longer.

Listeners can call (204) 222-7101 during the show and catch past podcasts on-demand through the website.