Best Caesar in Winnipeg? Marion Street Eatery Up to Snuff 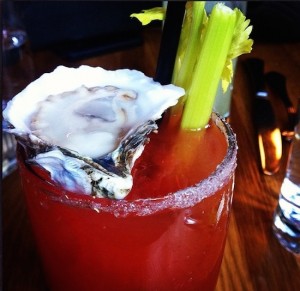 Caesar with a celery and oyster garnish. (FINEDESIGNDINE.COM)

When I think of Winnipeg as a cocktail, I would probably call it a Caesar. Like most cocktails, it’s very cold and icy, but also unconventional, with the potential to be full of surprises.

This savory concoction has a cult-like status in this city, and Canada for that matter. The drink is unlike anything else in the drink world, and way better than a Bloody Mary, in my opinion. The classic mix is a shot of vodka, five dashes of Worcestershire sauce, five dashes of Tabasco sauce, with Clamato juice on the rocks, garnished with a celery salt rim, and a celery or lime slice.

The great thing about Caesars is how versatile they can be. I’ve tried great Caesars made with gin and tequila. Bacon also goes great with Caesars as a garnish and even infused into the vodka itself. You also get all sorts of garnish variations when it comes to the drink.

The video clip below from “Breakfast Television” shows how Marion Street Eatery at 393 Marion Street in the Marion Hotel, makes their own version of the Caesar. Theirs contains the unexpected ingredients of steak seasoning, HP Sauce, and a whole lot of pickle juice. See for yourself how it’s made. 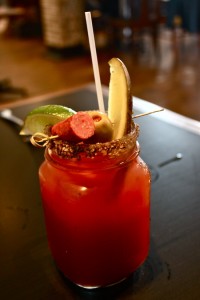 I was immediately impressed with their rustic decor, tantalizing menu, and impeccable service. But onto the Caesar — it came served with plenty of ice in a mason jar. Its impressive garnish consisted of a pickle wedge, large pimento-stuffed olive, and pepperette slice on a knotted skewer.

I realized how good the Caesar was when I took my first sip and experienced its burst of intense, zesty flavours. I definitely could taste the pickle juice which paired nicely with the tangy qualities of the Clamato juice. The HP sauce flavour was more subtle, but added depth to the drink. The steak spice rim and pepperette complimented the notes of HP Sauce as well, while the pickle garnish paired nicely the pickle juice. The drink was spicy, but just enough to add to the other flavours.

While you’re there, I would also highly recommend trying the grilled cheese. Made up of prosciutto ham, roasted garlic goat cheese, aged cheddar, tomatoes, and garlic sautéed mushrooms on rye bread, it was a very rich, creamy take on the classic sandwich.

I will definitely be back for another Caesar at Marion Street Eatery. I can definitely say that it’s one of the best I’ve tasted and is a tremendous value for the very reasonable price of $5.95.