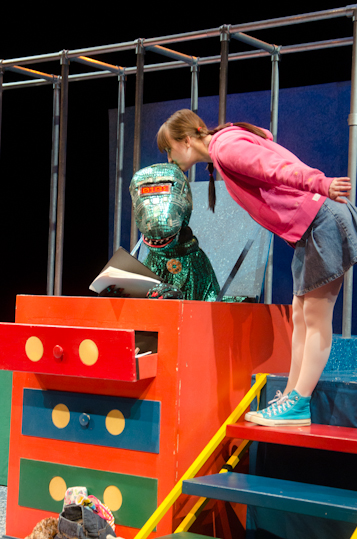 Night Light is on at MTYP until April 11. (HANDOUT)

The lights dim. Teachers and parents hush, children hush their neighbours, and the theatre goes quiet. “Night Light” at the Manitoba Theatre for Young People begins. Farley walks onto the stage set as a playground and tells us about the pressure she feels from her dad to get good grades. We learn she fears math, because she fears her father’s anger. The audience remembers back (whether the memory was stored days earlier or years earlier) to the fear they felt when they faced a scary math test or a scary parent, and together we really feel for Farley.

Victor walks by the play structure, and in an instant Farley snatches his backpack off his back. Farley, our first impression of the show and newfound friend, transforms before our eyes into a card-carrying, lunch-stealing, schoolyard bully. The scene unravels and we realize, in the way that Farley fears her dad, Victor fears Farley. Instead of feeling for the victim of the bully, we feel for both of them.

The play unravels and we learn the fears of three kids, Farley, Victor, and Victor’s little sister, and we learn along with them the different strategies for dealing with fear.

Here’s my favourite part; there was no cheesy “aha!” moment where all of their problem disintegrate. They experience success and failure, and, by the end of the show, they each learn to take control of their lives in spite of fear.

While some MTYP shows can easily entertain and teach all ages, this one is intended for children. The humour, the issues dealt with, and the language used are so relevant to children that it felt like a couple of kids were in on the writing process. The children in the audience were screaming and laughing along with each event. The little boy next to me was hollering, pointing, and half out of his seat like a football fan watching the Super Bowl.

Having said that, I enjoyed myself and felt braver as I walked back to my car to face the snowy roads and busy day ahead. You’ll enjoy it too, I’m sure. But, I would highly recommend you bring a child or pass the show’s info along to any parents you know. Any kid will benefit from this vivid and influential show.

Night Light is entertaining, applicable, and a must-see for Winnipeg children. It runs daily until Friday, April 11 and is suitable for children ages 5-12.