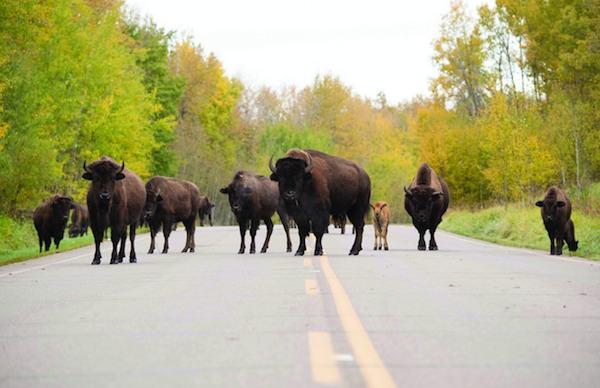 (NC) — Ecological restoration. By their very nature, bison, or buffalo, are “ecosystem engineers,” their presence triggering physical changes in the landscape that benefit other fauna and flora. By extension, this preserves precious ecosystems and ensures life-sustaining oxygen, air, water, food, medicine and fuel, for humans. Native plants depend on bison grazing to remain vigorous and disperse seeds. Through their trampling and wallowing around muddy waters, bison create habitats for other species and keep meadows shrub-free.

Cultural reconnection. For thousands of years, bison were an integral part of the lives and livelihoods of First Nations plains cultures and many of our pioneers and are an icon of Canada’s history. Restoring bison to the landscape is an opportunity to restore cultural and historical connections that have been lost for more than a century.

Natural selection. Bison are critical to predator-prey-scavenger relationships. Whether preyed upon by wolves or dying from other natural causes, a bison carcass can feed carnivores and scavengers such as grizzly bears, wolverines, foxes, eagles and wolves. Decomposing bison carcasses also provide a flush of nutrients for soil microorganisms and plants.

Education. All Canadians have a vested interest in preserving our natural resources. Having a chance to see and learn about the full range of native species in Canada, including the mighty bison, helps ensure we protect those resources. Today, Canadians can see bison roaming freely through protected areas of national parks in Alberta, Saskatchewan and Manitoba either in person or on the Parks Canada website, www.parks.gc.ca, through information and links to live streaming “bison cams” that are planned for the near future.

Species preservation. In the early 1900s, a few private citizens in the United States and the Canadian government made efforts to save the bison after overhunting and the expanding frontier dwindled their numbers from tens of millions to a few hundred. In 1907, the last large herd of wild plains bison, the Pablo-Allard herd, was sold by Michel Pablo to the Government of Canada and shipped to Alberta from Montana. The animals travelled by train and were herded to the newly-established Elk Park.

Today, their descendants, bison from Elk Island National Park, are being reintroduced to Montana through a joint effort between Parks Canada and the American Prairie Reserve. So far, some 150 bison have gone “home,” with 83 more calves to be transferred in a third wave this March. Veterinarians from the Canadian Food Inspection Agency oversee the transfer and certify the animals as disease-free.

As with all other threatened and vulnerable species, bison conservation efforts are important on a local, regional, national and international scale. Helping native plant and animal species, including bison, survive within national parks and protected areas ensure the long-term perpetuation of all native species.