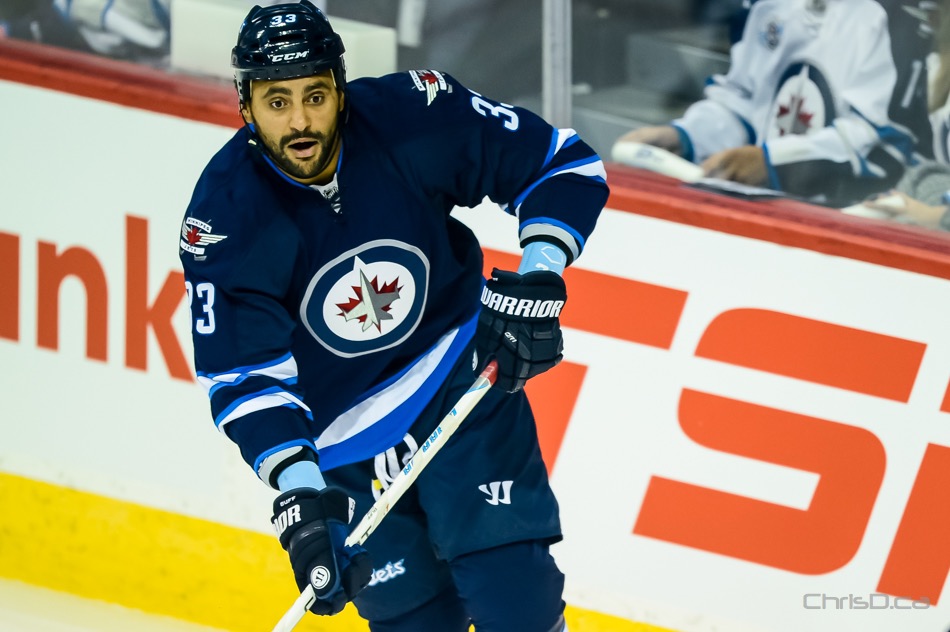 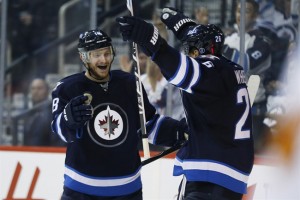 WINNIPEG – Dustin Byfuglien was the difference maker in the Jets’ 3-1 victory over the Calgary Flames on Friday.

The defenceman pokechecked Flames forward Johnny Gaudreau near Calgary’s blue line, got the puck and went down the boards and around defenceman Dennis Wideman before firing a sharp-angle, low shot that beat netminder Karri Ramo to make the score 2-1 with 1:28 remaining in regulation.

Calgary coach Bob Hartley challenged the goal to see if Byfuglien was offside, but it stood.

“I knew I was onside ’cause I had the puck, but I really didn’t know what was going on,” Byfuglien said. “There’s new rules in this league all the time, who knows what’s going on anymore.”

Blake Wheeler added an empty-net goal with 53 seconds left, the 150th of his career. He also had an assist and leads the Jets with seven points.

Bryan Little also had a goal and assist for Winnipeg (4-1-0).

Ondrej Pavelec made 19 saves for Winnipeg. Ramo stopped 27 of the 29 shots he faced for the Flames.

“It’s just a small, small, tiny mistake that I made and it made it look really awful. Not bad luck, just really poor execution on my part.”

Little said he thought Hartley made the challenge to let his players catch their breath.

“I think they were just using it for extra time to rest some of their players ’cause I think it was pretty obvious it wasn’t offside,” said Little.

Little was more than please with Byfuglien’s effort to create the go-ahead goal.

“He’s a guy that’s fun to watch when he’s playing his game,” Little said. “He’s just so strong and big on the puck and he shows he’s got a nice pair of hands and a great shot, too.

“When he wants to take that puck to the net, there’s not many guys in this league that can stop him.”

“Byfuglien deserves lots of credit,” he said. “(He) drove the net, uses his side, uses his speed and a bad-angle shot that went in.”

Still, Hartley wasn’t disappointed with his players despite the loss.

“We did lots of good things,” Hartley said. “We have lots of young players who are learning the game, especially the NHL game, and how to play in late minutes. But they got the last shot and they deserve to win.”

Calgary scored 3:38 into the first period when Sam Bennett’s wrap-around bounced off Pavelec to Backlund in front of the net and he flipped the puck in for his first goal of the season.

Little tied it 1-1 with his third goal of the season at 8:12 of the second when Wheeler shot the puck to the front of the crease and it deflected off Little’s skate in behind Ramo.

The Jets went on a four-minute power play late in the second after Josh Jooris got a double minor for high-sticking. The penalty carried over into the third and the Jets got three shots on goal.

The Flames didn’t have a shot on goal for more than 20 minutes, ending the slump at 11:06 of the third.

Pavelec said he had no choice but to stay sharp.

“They had a few power plays so you move a little bit,” he said. “It’s about focus. How you focus for every shot and for every minute. I’m happy that they didn’t score in the third.”

The game was the first of six straight at home for Winnipeg. St. Louis visits on Sunday. Calgary returns home for three games, starting Saturday against Edmonton.