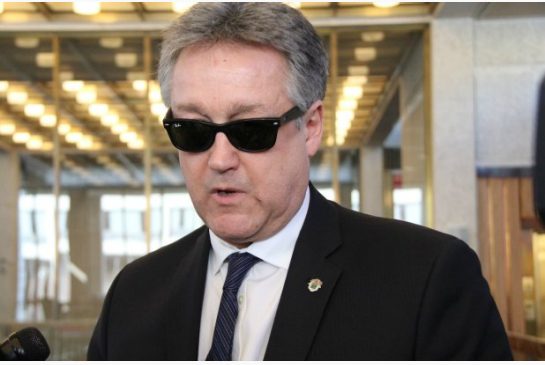 A Winnipeg city councillor spent a night in the drunk tank over the weekend after passing out in the back of a taxicab.

Ross Eadie (Mynarski) admits he was drinking at a number of locations Friday night before he passed out and was taken by police to the Main Street Project, which takes people if they’re intoxicated.

He says someone from the mayor’s office later told him he had assaulted someone, but he’s upset staff there would be told about it.

Eadie, who was released on Saturday and has not been charged, says he did not knowingly lash out at anyone.

A spokesman for the mayor says Brian Bowman would not comment on a personal matter.

A Winnipeg police spokesman says he has no information on the incident.

Eadie admits he had “way too much to drink” and had passed out in a cab when the police were called. But he said he doesn’t remember what happened after that.

“What happened is I had several drinks too much to have and I was with a friend. He put me in a taxi and I guess I probably passed out in the taxi and the driver must have called to get assistance to get me out of the taxi,” said Eadie, who is legally blind.

“If you wake up a blind guy who’s drunk, probably the first thing I’d do is try to push people away or whatever. It’s interesting in that I don’t understand why you would call the mayor.”