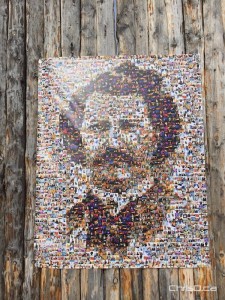 The face of Louis Riel lives on in Manitoba.

Festival du Voyageur on Monday unveiled a mural portrait of the province’s founding father, made up of more than 250 photographs.

The mural is affixed to the outside wall of Fort Gibraltar in the heart of Voyageur Park in St. Boniface.

Each of the photos is used multiple times throughout the piece and were gathered from social media to create Riel’s face and shoulders using light and dark textures.

The weatherproof mural will remain up until the end of Festival du Voyageur, which wraps up on February 21.