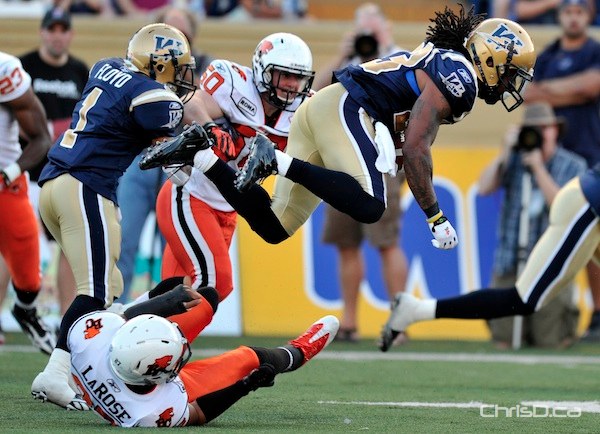 Winnipeg Blue Bombers’ Jonathan Hefney (23) leaps over BC Lions’ J.R. LaRose during the first half of their CFL game in Winnipeg on Thursday, July 28, 2011. (FRED GREENSLADE / REUTERS)

Defensive back Jonathan Hefney has signed a one-day contract with the Winnipeg Blue Bombers to retire as a member of the Blue and Gold.

Hefney appeared in 60 games over four seasons for the Blue Bombers after signing prior to the 2009 season.

“I’m very thankful to retire with the organization that first game me my start in the CFL,” Hefney said.

“Some of the greatest years for me happened with my teammates in Winnipeg, and those amazing fans. Thank you to everyone who helped me along the way, both in Winnipeg and everywhere else my football career took me. The Bomber organization will always be a big piece of me, and I’ll always be a Bomber.”

Hefney went on to play in Calgary, and then Montreal in 2015, finishing his career with 84 games played (71 starts), 311 defensive tackles, 24 special teams tackles, 17 interceptions, and seven fumble recoveries.