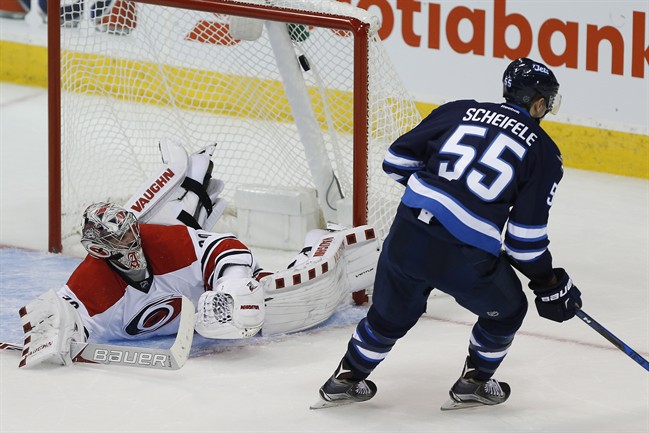 It came on the power play. His parents from Finland were in the stands. It drew a roar from Winnipeg Jets fans like none he’d heard before.

And, more importantly, it helped the Jets come back from a 4-1 third-period deficit to beat the Carolina Hurricanes 5-4 on Thursday.

Mark Scheifele scored the winner at 2:41 of overtime, taking a pass from captain Blake Wheeler, who had a goal and pair of assists. The puck went high past Hurricanes goalie Cam Ward. Mathieu Perreault had tied it 4-4 at 18:31 of the third period with the extra attacker on a goal Laine assisted on.

The 18-year-old Laine said it wasn’t really a relief to get his first NHL goal, which made it 4-3 at 13:33 after Wheeler had scored shorthanded.

“I was happy with my game before the goal,” said the second overall pick in this year’s NHL entry draft. “I think I played pretty well in all of the zones, but it was nice to get the goal and the assist at the end of that third period.”

Jeff Skinner and Lee Stempniak each scored a goal and added an assist for Carolina. Jordan Staal and Victor Rask also scored for the Hurricanes, who were playing the first game of a six-game road trip to open the season.

Connor Helleybuyck stopped 23-of-27 shots he faced for Winnipeg. Ward made 21 saves for Carolina, which scored twice on the power play.

Many eyes were on Laine prior to the game after this year’s first-overall pick Auston Matthews scored four goals for the Toronto Maple Leafs on Wednesday.

Laine was asked how much harder it was for him to play after Matthews’ output.

“None,” Laine replied. “He’s playing his game and his career. I don’t want to match my game to his. He can score 20 goals in a game, I don’t care. It’s good for him. I’m just going to help my team to win with my things.”

The teams were tied 1-1 after the first period, but Carolina held a 3-1 lead heading into the final period.

Skinner wasn’t happy with the run-and-gun style of play.

“For the fans it’s exciting,” Skinner said. “If you win that way, it’s nice. But it’s not fun to lose that way. When you get a 4-1 lead like that you definitely don’t want to play that way.

“They’ve got some guys with some skill who can hurt you when you open it up like that.”

Winnipeg veteran centre Bryan Little collided with Carolina forward Bryan Bickell midway through the first period. He hobbled off the ice favouring a leg and didn’t return to the game. Jets head coach Paul Maurice had no update for Little’s condition after the game

Maurice, however, was proud of his players’ no-quit effort.

“A young team gets down 4-1, very, very few of them come back,” Maurice said.

Carolina head coach Bill Peters said the style of hockey these days is up-temp and exciting with rookies like Laine, Matthews and Hurricanes forward Sebastian Aho, who had an assist on Thursday, entering the league.

“The Ahos, Matthews and Laines of the world, they’re the real deal,” Peters said. “They’re highly touted guys who have been good for a long time.”

Scheifele was happy to see Laine net his first goal.

“That’s awesome for him and awesome for the team, especially being a big (draft) pick for us,” Scheifele said. “That guy is going to be such a big contributor for years to come. He made some really great plays out there in the third. It was a really great period for him.”