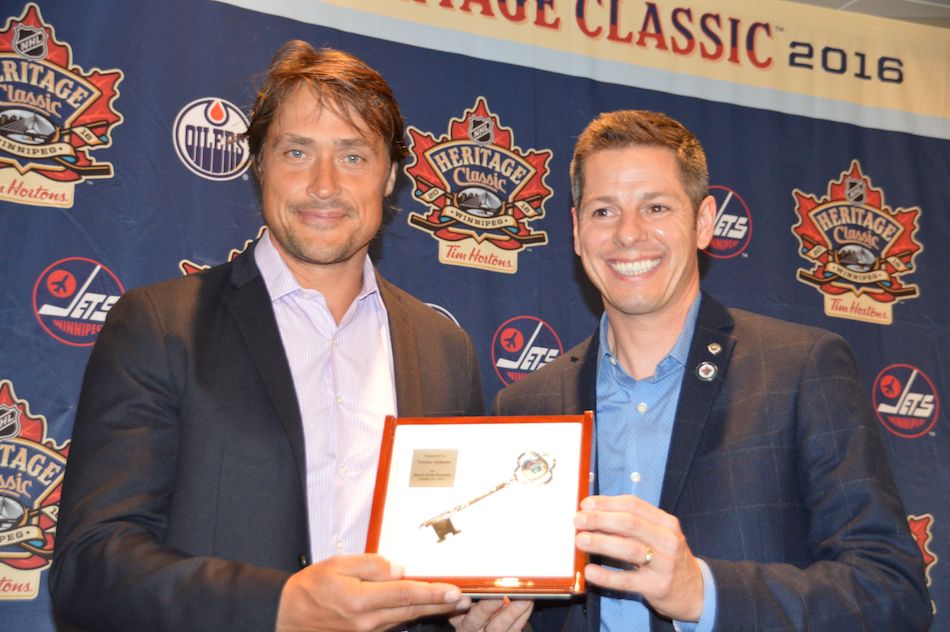 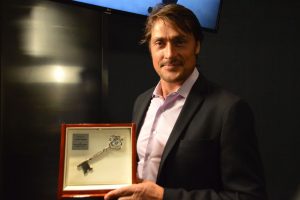 Teemu Selanne holds up his key to the city on Friday afternoon. (DAVE BAXTER / CHRISD.CA)

The man known as the Finnish Flash has received Winnipeg’s highest honour.

Teemu Selanne was bestowed with the key to the city by Mayor Brian Bowman during a ceremony Friday afternoon at MTS Centre.

Selanne arrived in Winnipeg Thursday night to a swarm of fans at James Richardson International Airport. The former Jet, who played nearly four seasons in Winnipeg up until 1995-96, is still adored in the city and had a chance to play against his former team a few years ago when the Anaheim Ducks came to town.

“Winnipeg has always been a very special place for me,” Selanne said. “I always remember how open-armed Winnipeg and the fans took me in here.

“The way the fans lived that whole journey with me that whole first year was just unbelievable.

“The whole city was behind me and the team, and it was hard to believe how excited the people were.”

Selanne added that his oldest son Eemil, who is now 20-years-old was born in Winnipeg so “Winnipeg really has a big part of my heart, and of who I am these days.”

Mayor Bowman added that hockey is one of those moments in time that bond citizens together.

“Teemu Selanne’s NHL goal-scoring record during his historic rookie season is one of those moments that brought many of us together and was unforgettable. Known as much for his personality off the ice as he was for his play on the ice, Teemu is truly an ambassador for the game of hockey and a hero to Winnipeg Jets fans.”

Selanne played 21 seasons in the NHL with Winnipeg, Anaheim, San Jose and Colorado before retiring in 2014.

Selanne is in Winnipeg for this weekend’s NHL Heritage Classic. The right winger will suit up to play on the Jets alumni team on Saturday. Puck drop is at 3 p.m.

— With files from Dave Baxter