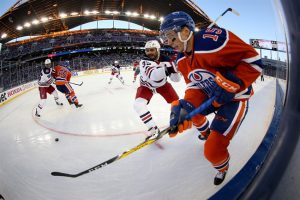 WINNIPEG — The stage was different Sunday, but for the Winnipeg Jets, the same struggles showed up.

Through five games this season, the Jets’ major offensive struggle has been on the power play. At the much-anticipated Heritage Classic, the man advantage did them in again, as two power play gaffes in the second period were the turning point in a 3-0 win for the Edmonton Oilers.

Winnipeg, now 2-for-19 on the power play this season, was given an opportunity midway through the second as Darnell Nurse sat for cross-checking. It quickly turned ugly, though, when Dustin Byfuglien coughed up the puck at the Oilers blue line, allowing a Mark Letestu breakaway that ended in an easy goal.

Trailing 1-0, the Jets fumbled the puck again moments later, just as Nurse burst out of the penalty box. Off on a break with the electric youngster Connor McDavid, he received a slick pass, burying it to put the Oilers up two.

Zack Kassian added another Oilers goal late in the second after Patrik Laine attempted a deke in his own zone, and Winnipeg was unable to respond in the third.

“The three turnovers, they’re obvious and the result was emphatic,” said Jets coach Paul Maurice. “I wouldn’t like to think that’s part of our game, we’re seeing it a fair amount early on, but didn’t see it in the first.”

“But those turnovers – good ice, bad ice, whatever – they’re going to be in your net.”

“In the first period, we did what we wanted to do – we got pucks behind them, we had good sticks, we weren’t trying to do anything too fancy. Then we started to play with the puck a little too much, tried to make plays that weren’t there, and from there they were able to capitalize,” said Jets centre Mark Scheifele.

Oilers goalie Cam Talbot thwarted the Jets all afternoon, tallying 31 saves for the shutout. Kassian had an assist to go with his goal, while Benoit Pouliot and Ryan Nugent-Hopkins also had helpers. Winnipeg, meanwhile, got a good showing from goalie Connor Hellebuyck, who swatted off 32 shots in a losing effort.

The Jets fall to 2-3-0 after the loss, while the Oilers are the surprise of this young NHL season with their 5-1-0 start.

“We shouldn’t hit the panic button too soon here. We’re going to come together as a team and when we do, we’re going to be dangerous,” said Hellebuyck.

Of course, this all came on the Heritage Classic stage, as Winnipeg hosted its first ever outdoor NHL game in front of 33,240 fans at Investors Group Field.

“There’s a bit of a circus atmosphere here in town the last five days, with the hockey that’s been played,” said Maurice, referring to Wednesday’s comeback win over the Maple Leafs and today’s big stage. “We don’t want to shy away from that, we want to embrace that, we want to become a team that plays in these kind of meaningful, exciting, and eventually pressure-filled games. The fact that it was early in the year, I thought it was great.”

The puck drop was delayed two hours from the initial 2 p.m. schedule, as the afternoon sun reflecting off the ice posed hazard to players. By the time the game got underway at 3:53 p.m., the Oilers and Jets had only shadows to deal with, and it never came into play during a quiet first period.

In that first, the Jets had a couple chances to open the scoring, with the lineup of Scheifele, Laine and Byfuglien causing problems. Seven minutes in, Scheifele got a cross-ice pass to Laine, but the rookie was unable to get a handle.

“I think it’s a prime spot for any hockey player, and you should be able to score from those chances and I didn’t,” said Laine.

Minutes later, Byfuglien delivered to Blake Wheeler on the doorstep, but he too failed to get a stick on the puck. Winnipeg outshot the Oilers 10-8 in the first, but puck security and penalties foiled their efforts to get on the board in the second and third.

After this brief flirtation with a football stadium, the Jets have 7 of the next 11 games on road rinks. This begins with a home-and-home against the Dallas Stars, who they’ll meet Tuesday in Dallas and Thursday at the MTS Centre.