VIDEO: Conditions on Highway 75 this morning and on the South Perimeter Highway. #mbstorm #Winnipeg pic.twitter.com/yeZdwjTIuM 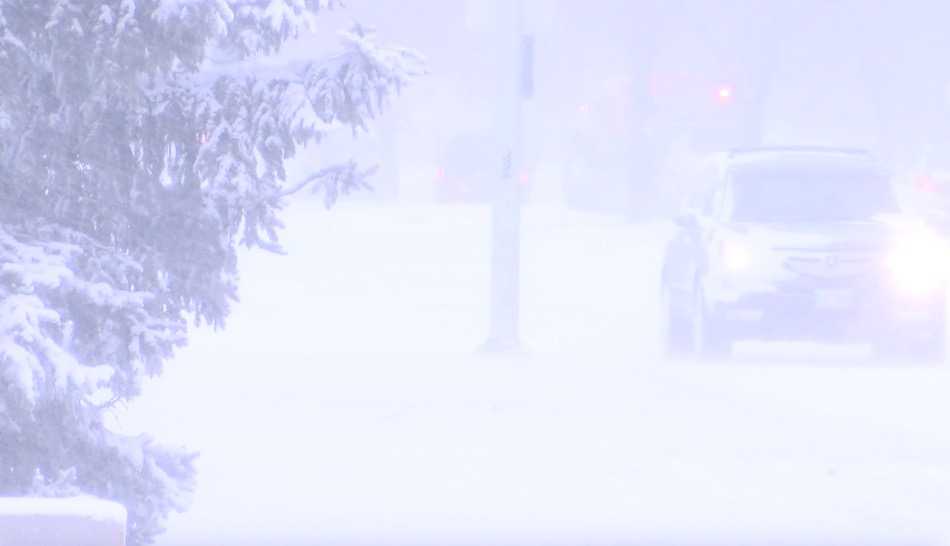 Driving visibility, as shown here on Tuesday, won’t be much better today with a blowing snow advisory in effect for southern Manitoba. (CHRISD.CA)

WINNIPEG — A storm that blasted Winnipeg and southern Manitoba on Tuesday isn’t done with us just yet. A blowing snow advisory remains in effect for much of the southern portion of the province, reducing visibility mixed with lighter snowfall.

Another 2-4 cm of snow is expected to fall today, paired with winds gusting to 60 km/h.

“The wind and snow will ease tonight. Bitterly cold arctic air sweeps in behind this system, with lows below -20°C expected by the end of the week accompanied by wind chill values in the -30 to -35 range,” according to Environment Canada.

Visibility could be reduced to 800 metres or less for at least three hours.

The City of Winnipeg has declared a snow route parking ban at midnight tonight.

The ban extends the annual snow route parking Ban by two hours, prohibiting parking on any designated snow route between midnight and 7 a.m.

Due to heavy amounts of snow, city crews are continuing to salt, sand and plow main routes, bus routes and collector streets today and tonight using motor graders. Sidewalks on main routes and active transportation paths adjacent to main routes are also being cleared until completed. Clearing of snow from back lanes began this morning at 7 a.m. and will continue until completed.

As of 7:30 a.m. the following highways remained closed due to poor winter driving conditions. For updated closures, visit Manitoba511.ca or follow @MBGovRoads on Twitter.

Due to ongoing inclement weather conditions, Red River College has closed the following campuses for Wednesday: Interlake, Peguis-Fisher River, Winkler and Portage la Prairie. All other campuses currently remain open with regular scheduled classes. Students are advised to check RRC’s website throughout the day for updates.