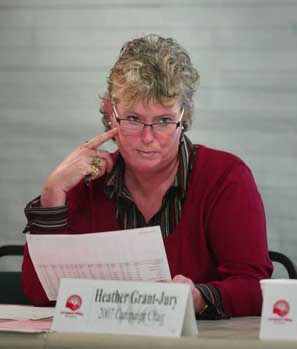 WINNIPEG – A union says one of its former directors who served briefly as a top adviser to a Manitoba premier has been charged with fraud.

The United Food and Commercial Workers union says Heather Grant-Jury has been charged with fraud over $5,000 in relation to expense claims.

Grant-Jury directed a training centre run by the union, but left the job in late 2014 for about five months to serve as principal secretary to former premier Greg Selinger.

She also served on the board of the Crown-owned Manitoba Public Insurance and as a member of the provincial NDP election committee until the end of last year.

Selinger’s press secretary said in February the investigation was not related to Grant-Jury’s activities in government.

Grant-Jury could not immediately be reached for comment Monday. Police would only say that an unnamed 54-year-old woman had been charged with a fraud complaint at the union.

“The union was recently notified by Winnipeg police that former UFCW Local 832 Training Centre director Heather Grant-Jury has been charged with fraud over $5,000,” a written statement from the union Monday said.

“PricewaterhouseCoopers, an auditing firm hired by the union to perform a forensic audit, completed their work in the spring and that information was turned over to the Winnipeg police to complete their own investigation. UFCW Local 832 will be seeking full restitution of all money.”