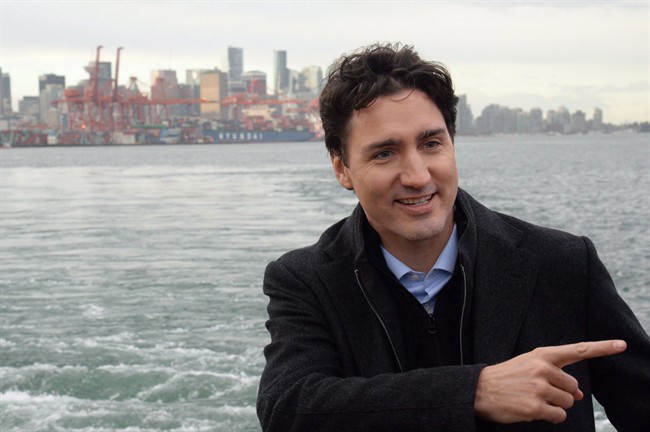 The city of vancouver is shown in the background as Prime Minister Justin Trudeau tours a tugboat in Vancouver Harbour, Tuesday, Dec.20, 2016. Trudeau is planning to embark on a campaign-style tour, talking to average folks at coffee shops and church basements across the country. (THE CANADIAN PRESS/Jonathan Hayward)

OTTAWA – Prime Minister Justin Trudeau is ringing in the new year with a determined effort to re-establish his connection with grassroots Canadians after closing out 2016 amid accusations of kowtowing to wealthy donors at elite Liberal fundraisers.

Trudeau is planning to embark on a campaign-style tour, talking to average folks at coffee shops and church basements across the country.

His communications director, Kate Purchase, says Trudeau will make three or four pit stops each day of the tour.

It is slated to take up six or seven days over the next three weeks, interspersed with some international travel and a cabinet retreat before Parliament resumes at the end of the month.

The first leg of the tour is to start at the end of next week with Trudeau travelling Highway 401 from Ottawa to London, Ont., with an overnight at Canadian Forces Base Trenton.

That will be followed up by stops in British Columbia, Quebec and the Prairies, with events still being planned for the Atlantic provinces.

Purchase says the events will be a mix of traditional townhall-style, question-and-answer sessions and more informal mingling with people in coffee shops and church basements.

“We see this as part of a concerted effort to remain connected to Canadians, at home in their communities,” she says.

“The prime minister wants to hear from them how they are feeling at the start of 2017, what their concerns and anxieties are and what we can do to help alleviate that.”

The tour may also be intended to reverse the slippage in Trudeau’s popularity over the final months of 2016 as he deflected allegations of unethical fundraising practices over his appearance at multiple events where donors contributed as much as $1,500 to the Liberal party in order to rub shoulders with the prime minister.

It will also feed into consultations leading up to his government’s second budget, likely to be introduced in February or March.

The budget, the highlight of the winter parliamentary sitting, is expected to focus on the government’s innovation strategy, which Purchase describes as anticipating economic opportunities of the future and helping middle-class Canadians take advantage of them.

While he’ll be intent on reconnecting with average folks for the next few weeks, Trudeau will take a couple of days to hobnob with some of the world’s most prominent government, business and academic leaders at the World Economic Forum in Davos, Switzerland, which runs from Jan. 17-20.

As he did at last year’s summit, Purchase says Trudeau will use the forum to promote Canada as a stable, safe place in which to invest.

This year’s summit is focused on a theme close to Trudeau’s heart: developing ways to ensure the benefits of economic growth and social progress are spread more equitably, to counter the frustration over unequally shared prosperity that has led to an explosion of protectionism, populism and nativism around the globe.

Immediately following the summit, Trudeau will convene a cabinet retreat in Calgary.

He held a retreat in nearby Kananaskis country in the spring, but Purchase says the Calgary gathering will give ministers a chance to tap into the mood in the oilpatch following last fall’s decisions to approve two pipelines and to impose a national price on carbon as part of a pan-Canadian climate change strategy.