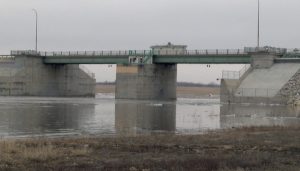 The gates to the floodway went up at about 10:15 a.m. The river is currently expected to peak between 18.6 to 20.8 feet James Avenue datum.

“City engineers have determined that the number of properties needing sandbag dikes has decreased from 50 to 25,” reads a statement from the City. “The number of sandbags has been reduced accordingly from 75,000 to 20,000. The City currently has enough sandbags made to address the needs of at-risk properties, but will continue making sandbags until the end of today as a precaution.”

The City says the most at-risk property has begun constructing its dike.

“City officials will be revisiting the 25 identified properties who may still need to build a dike, to update survey readings and consult with property owners. The City will be advising those property owners who no longer need to construct dikes and will continue to monitor their need for flood protection.”

The City says the public can contact them at 311 if they believe their property is at risk of flooding. In the meantime, the city is using the hashtag #WpgFlood for flood updates.

The Province, meanwhile, says the Portage Diversion also began Friday morning to help manage flows and ice on the Assiniboine River. Flood watches are in effect for Turtle, Wood, Swan, Icelandic, Whitemouth and Whitemud rivers. There is also flood warnings for Pipestone Creek, the lower Red River near Selkirk, and the Fisher, Morris and Pembina rivers.

The Province says the ring dike in Gretna is partially closed thanks to flooding on the Pembina River.