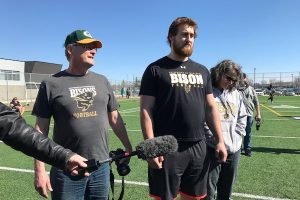 U of M Bisons offensive lineman Geoff Gray stands with his parents on Sunday, April 30, 2017, one day after signing a free-agent contract with the Green Bay Packers. (CHRISD.CA)

Gray, 22, was passed over on Saturday during the league draft but signed a free-agent contract with the Green Bay Packers.

“I’m excited to join the Packers. Several team teams came on strong and made good offers but I had to go with my gut, and Green Bay seemed like the right fit for me,” Gray said.

The 6’6?, 310 lbs. student-athlete impressed scouts from across the NFL and CFL last month during a pro day workout at the University of Manitoba.

Gray finished his fourth playing season at Manitoba in 2016 and started all eight league games for the Bisons, who averaged 34.5 points and 487.1 total yards per contest, including 333.1 yards through the air, good for third in the country in his senior year.

“On behalf of the Bison Football program, we are obviously very excited and happy for Geoff as he signs with the Green Bay Packers. This is the second year in a row, and third overall, where a Bison has generated a NFL opportunity. Bison Football is very proud today,” head coach Brian Dobie said in a release.