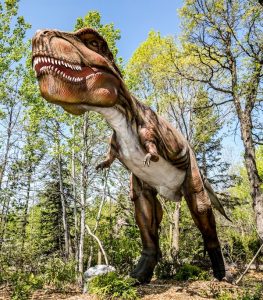 Dinosaurs Alive! is back for another season at Assiniboine Park Zoo. (APC / HANDOUT)

WINNIPEG — First, it was held over, and now it’s back for a second run. The Assiniboine Park Zoo’s wildly popular “Dinosaurs Alive!” exhibit has returned.

The zoo unveiled a new 13-metre long Tylosaurusdinosaur to join the 15 other life-size animatronic giants on Thursday.

“The Tylosaurus is a very exciting addition to the exhibit, particularly because of its history of discovery in Manitoba,” said Bran Adams, education coordinator at Assiniboine Park Conservancy. “In addition, Mosasaurs are related to reptiles, so it has some very interesting connections to the snakes and lizards we have here at the Zoo. I’m sure that visitors of all ages are going to love it!”

Dinosaurs Alive! is included as part of a visitor’s regular admission to the zoo. It offers a chance to step back in time to the prehistoric era as the lifelike dinosaurs move and roar demonstrating how they may have looked and moved in a natural environment millions of years ago. The exhibit also features a dig site and excavation site where children of all ages can discover what it’s like to be a paleontologist.

Across town, another dino-related exhibition is preparing for its summer run. The Manitoba Museum’s “Word’s Giant Dinosaurs” opens on Friday and will run through September 4. 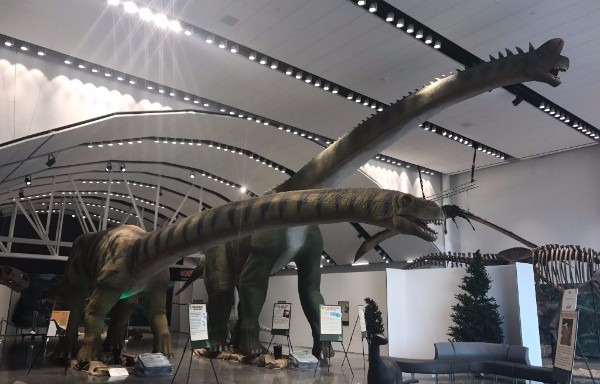 The exhibit presents a touring collection of some of the world’s largest dinosaurs. Fossils, casts, robotics, videos, and other media are used to illustrate the story of how dinosaurs evolved to such immense sizes, and how they dominated life on land for well over 100 million years.

“In putting together this new exhibit, I saw this great opportunity to focus on the giant sauropods, the really big dinosaurs that due to size don’t always get to be featured,” said Dinodon Inc. CEO Don Lessem.

“For 170 million years sauropods were the most successful dinosaurs on Earth and a lot of questions remain as to why this was so.”

The exhibit in the museum’s recently-reopened Alloway Hall accommodates the massive attractions, with the Brachiosaurus recreation measuring 24-feet high, and the Mamenchisaurus coming in at 66 feet.

Enter to win tickets to World’s Giant Dinosaurs on our contests page.