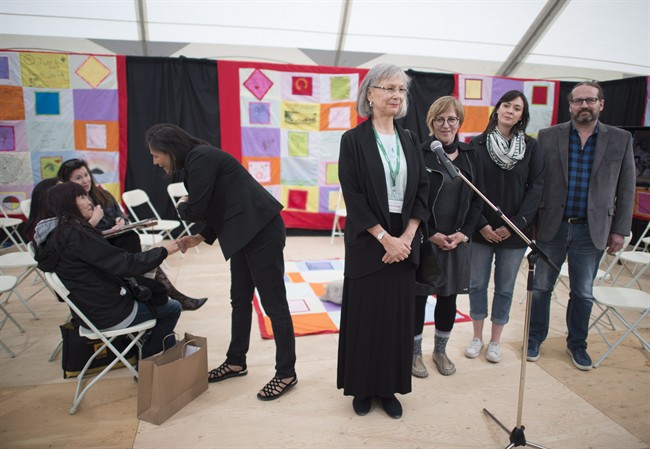 WHITEHORSE – The head of a national inquiry into missing and murdered indigenous women and girls says she understands why families in Whitehorse are anxious as the process begins.

“We want to make them feel welcome, safe and understood and heard. And I guess we’ll just have to prove that we can do it.”

More than 40 people have signed up to speak at the inquiry’s first family hearings, starting Tuesday. Buller spoke to media on Monday inside a tent where testimony will be heard, saying her team is working hard to ensure the families’ expectations are met.

A sacred fire ceremony in Whitehorse marked the opening of the hearings Monday morning. About 30 people gathered in a circle at sunrise for traditional prayers and songs as the fire was lit.

It will burn until the hearings conclude later this week.

Families have the option of testifying privately to a statement-taker or speaking publicly inside the white tent, where the interior walls are decorated with brightly coloured blankets created by volunteers and chairs are set up in a circle.

Buller said the setting was designed to provide comfort and safety to families and survivors.

The hearings begin as the inquiry faces scrutiny across the country over delays and poor communication. Families and advocates in Whitehorse have said they are eager to share their stories, but have questions about how they will be used.

Buller said that the inquiry’s legal and health teams have been meeting with families in a number of Yukon communities to ensure they know the different options for participating and to make sure they have resources in their communities.

Asked what kind of support will be provided to families after they testify, Buller said she couldn’t provide an “itemized list.”

“But there certainly are supports available. It’s not just limited to what I call Western supports, there’s traditional indigneous supports as well,” she said.

Hearings are set to conclude Thursday and Buller stressed that this will not be the only opportunity for Yukon families to share their stories.

“People are going to come forward over time. There won’t be: ‘If you don’t speak to us this week, then you’re not going to speak to us.’ That’s not the case at all.”

The hearings are scheduled to take place from 9 a.m. to 5 p.m., but Buller said she expects “long days.”

“We’ll go as long as it takes for people to tell us what they want to,” she said.

Commissioners will be examining and reporting on the causes of violence against indigenous females by scrutinizing practices, policies and institutions, including policing and child welfare.

Jeanie Dendys, Yukon’s minister responsible for the women’s directorate, said 41 indigenous women have disappeared or been killed in the territory over several decades.

Council of Yukon First Nations Grand Chief Peter Johnston said he’s pleased the families of missing and murdered women in the territory finally have a chance to present their stories and share their challenges.

“We are very fortunate to have this opportunity here in the Yukon, to start it off, to set the bar high,” Johnston said.

“To give, most importantly, the families the opportunity to bring forward their cases and to hopefully have a little resolve in their life.”

— With files from CKRW